*Hijjueputa roughly translates to son of a bitch, but carries a bit more weight here in Colombia

I had a few conversations along these lines on my first day, along with waves, cheers, and calls of “strap a motor to that thing!”. One fellow cyclist even knew who I was, having seen Carlos’s Facebook post on my imminent departure. It’s an odd experience when on your first day heading off into the unknown you suddenly hear your named being called by a complete stranger. She wished me well and then went on her way, not weighed down by mountains of belongings.

Within 2 hours of saying goodbye to Carlos and his extremely sweet mother, who gifted me a plastic whistle (presumably to ward off rapists) and setting off south from Envigado, I received more goodwill than in the entire 2 weeks I spent cycling through Europe. I’m sure my Colombian football shirt helped a little, but I suspect I would’ve received a similar reception regardless. Colombians are a friendly people and cyclists are held in high regard here.

After about half an hour of riding along busy roads brimming with trucks and motorbikes, I found my turn off and was soon edging my way up one of the strikingly green hills that surround Medellin. This much calmer road, clearly popular among the Paisa cycle enthusiasts who passed me in droves, led me down towards Caldas, my first port of call. I was there within an hour an a half and, as I was making good time, decided to keep on going and find lunch later on. This was a mistake. 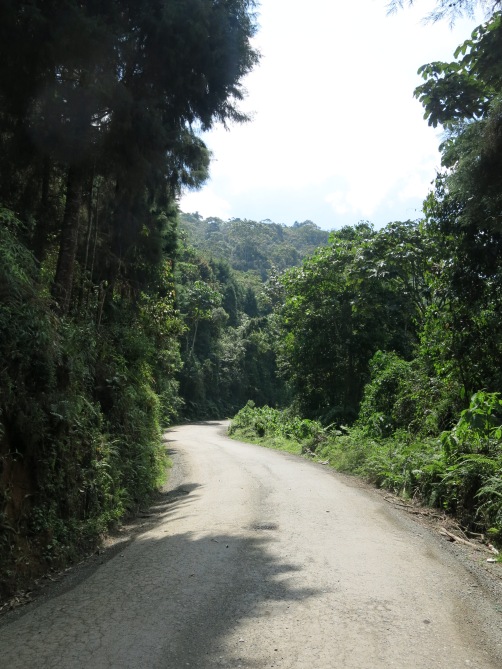 In lieu of taking one of the busier, less interesting roads straight down to La Pintada or west to Amaga, Carlos’s directions led me down a much less travelled (and paved) road up into the Antioquian hills. Within minutes I was all on my own. The odd motorcycle passed by every 15 minutes or so, but for the most part it was just me, my bike, and my virgin legs. It was tough. The road wound its way up, deep into the hills and I began to pay the price for my time spent boozing and doing escape rooms in Bogota rather than doing any type of physical preparation. Before long I was pushing the bike and panting like a dog. 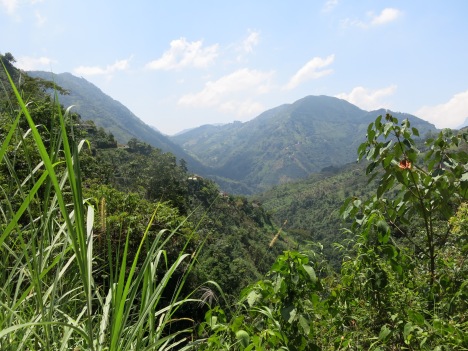 Thankfully the Antioquian countryside more than made up for my physical struggles. It was a beautiful sunny day, all blue skies and birds tweeting, and I was treated to views of the lush rolling hills that characterise this part of Colombia. 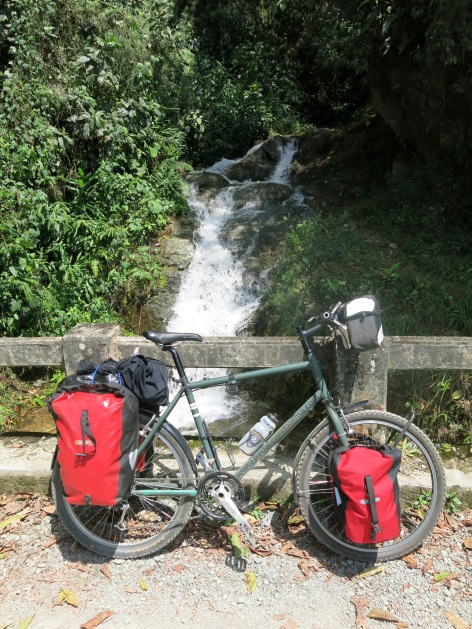 I found a little waterfall under a bridge and bathed myself in the cool water and lazed in the sun as butterflies and dragonflies buzzed around my head. With hunger beckoning, I got back on the bike and went in search of a little almuerzo (lunch) joint. In my experience of Colombia, you’re never too far from a little restaurant where one can buy a soup, a meal loaded with carbs and a refillable juice for around 5 or 6 thousand pesos (about $2). Therefore I packed accordingly, bringing only water, some condiments and a Milky Way with me. With the Milky Way already lining my stomach, and only the limited hostel breakfast and a lone empanada to accompany it, before long I was running low on energy in the sultry midday sun. Eventually I found a little tienda and had the most enjoyable drink I’ve had in years but alas, still no almuerzo.

I rode on for a couple more hours of alternating calf crushing hills and juddering descents before finally setting my eyes on Fredonia, where I was to spend the night. Unfortunately between my vantage point and the town lay a hefty valley. I’m sure in weeks or months to come, this type of valley will barely muster a grunt of recognition from my battle wearied lips, but to my unfit, lunch-less self, this looked like Colca Canyon. Within 20 minutes I was down at the bottom and starting the indomitable climb. Before long I was pushing the bike and garnering looks of pity from passers by. My energy was at rock bottom and I felt like I was going to pass out, so I resorted to the only source of sugar I had left. I broke out the condiments and started chugging honey. This did the trick. 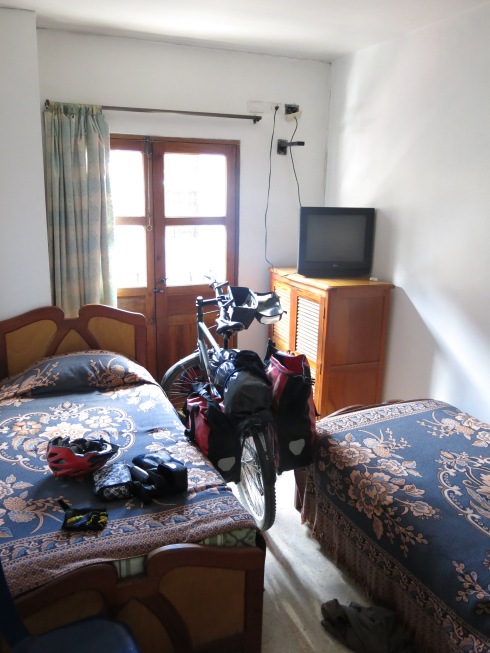 Half an hour later I rolled in to Fredonia (which turns out to be the topographical equivalent of San Francisco) and crashed hard at a cheap-ish hotel, suffering but satisfied. Next stop: Tamesis, Jehrico and Jardin.

Tunes: Husker Du – New Day Rising, David Bowie – The Rise and Fall of Ziggy Stardust and the Spiders from Mars