If there was one section of Colombia that slightly worried me it was this: riding through the corridor between Palmira and Cali, respectively the 8th and 10th most dangerous cities in the world. While the chances of anything happening were tiny, I didn’t want to end up skirting some dodgy barrio come nightfall so I set of from Walter’s good and early to be sure. In fact I need not have worried. I shot like a bullet down the Pan-American Highway and by 12 o clock I was comfortably clear of both cities. All I had to do was find some lunch.

I felt relaxed. Complacent even. I picked a random town, Puerto Tejada, and confidently rode in. It immediately felt different to all of the other towns I’d cycled through, clearly poorer and with a predominantly black population in place of the usual latino. Everyone was noticeably more friendly and seemed (extra) surprised to see me. I didn’t really think anything of it until I got to the centre of the town. The second I stopped a guy ushered me over and I asked what I was looking for, where I wanted to go. This in itself wasn’t unusual as people offer me help all of the time, but something in his manner was different. It didn’t come from a place of friendliness but of concern.

I decided to get out ASAP but not before grabbing an almuerzo en route. As I waited for my food I absent mindedly started flicking through the photos on my camera. Colombians have a saying, “No dar papaya”. This basically means “Don’t be stupid and give people any excuse to rob you”. The senora came over to me and told me to put the camera away immediately, that I was in a very dangerous area and I had to be careful. I was “dando papaya” like a fool and I hadn’t even realised. “No-one around here will help you. You should get out of here as quick as you can”

“Go now. And never look back”

Okay, she didn’t say that last part, but she might as well have. Now I’m a very fast eater, as anyone who knows me will testify, but I didn’t so much eat as I inhaled my lunch in Puerto Tejada. I was back on the bike in a flash and heading straight for the exit. Suddenly everything took on a darker turn. A homeless man shouted something at me and “hijueputa” was definitely included, and every previously welcoming smile seemed sinister. I probably burned off the entire lunch within minutes as I furiously pedalled my way out of town. Thankfully everything turned out fine and the rest of the way down to Santiago de Quilichao was uneventful, leaving me only roadside signs as a source of entertainment.

The next morning, over a delicious lulada, I wrestled over which route to take. Should I go south along the busy Pan-America directly to Popayan or head east along the bucolic unpaved mountain roads through an alleged FARC hotspot? I’d read blogs of other bike tourers riding through these mountains without a hitch but the locals gave me mixed messages, some assuring me it was fine while others wavering over the safety. Just as I was about to take the plunge, I was waved into a hairdressers, ironically by two men with fabulous heads of skin. One of them had lived in England for 20 years and when I told him my plans he warned against it. “Probably nothing will happen but why take the risk? Go south and then visit Silvia! A beautiful town in the mountains.!” 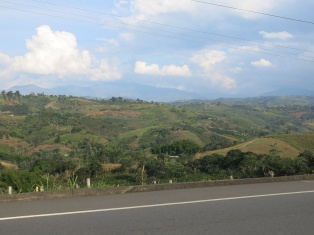 I couldn’t fault the man’s logic and, safe in the knowledge that I wouldn’t be lacking for mountain roads in the coming weeks, I set off south up the sweltering Pan-Americana
towards Popayan. 4 hours of grinding up hills in murderous heat later and I settled down for the night at a truckstop motel just outside of Piendamo. 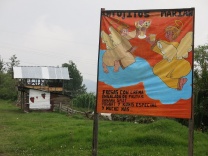 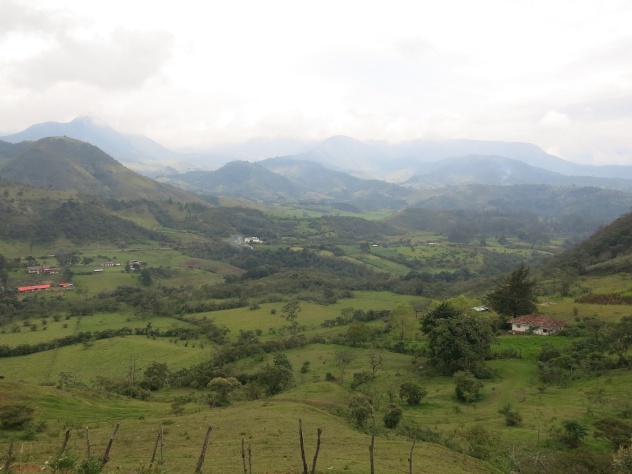 The next morning I voyaged east into the mountains. The road up to Silvia was a bit steep but the brisk climate and quiet roads were a refreshing change from the bustling highway. Pineapple stalls became cheese and dairy stands and before long I understood why the region is known as the Switzerland of the Americas.

Silvia itself, which is famed for the native Misaks and their weekly market, didn’t really do much for me. Maybe it was the weather, or the fact that it wasn’t market day, but the town seemed a little downtrodden. Luckily I was pointed in the direction of the zona verde beside the river, which proved to be a picture perfect camping spot. 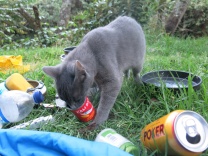 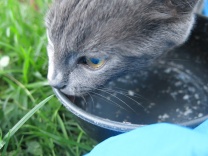 Next stop: Tam’s hacienda in Popayan