I didn’t want to leave Casa Madrid. Diana told me tales of a German guy named Matheus who spent 2 months there and I envisioned myself spending the rest of my life swinging in the hammock, reading books, drinking beer and practising Spanish. And so, it was for that exact reason that I had to leave. I cooked Diana and Isabella a thank you meal of makeshift carbonara (ain’t easy to find bacon on a Sunday in Bolivar) and regretfully pulled myself away from their tractor beam and back onto the saddle.

I worked my way down to Tulua, where Mario my erstwhile lunch companion lived. He’d mentioned perhaps meeting up again, but as soon as I entered Tulua I wanted to leave. Cities are the enemy of cycle tourists and, while small, Tulua was no exception. Too much traffic, too many people, too easy to get lost.I grabbed a cheap lunch and got out of dodge.

All Roads Lead to Jonathan

Just outside of Buga I picked up another puncture. Despite patching it up, the tyre was still leaking a tiny bit of air so I made my way to a local bicicleteria to get it sorted. While making small talk one of mechanics mentioned a local bike touring friend who might be able to put me up. That morning, while browsing Couchsurfing I’d happened upon a bike tourer from Buga named Jonathan and sent him a hopeful couch request which he hadn’t replied to. As it turned out the mechanic’s friend was the very same guy. He tried to call him but couldn’t get through and recommended I try the fire station instead. Fire stations are renowned for giving shelter to bike tourers in South America so I thought I’d give it a shot.

The fireman at the gate didn’t offer me floor space or a bunk as I’d hoped but he said he’d call a friend. Guess who? That’s right: Jonathan. He couldn’t get through either (it seemed me and Jonathan were destined to pass like ships in the night) but said his chum, Walter, who owned a doggy daycare centre could definitely help me out. An hour later Walter showed up and we loaded the bike into his station wagon and set off for planet dog.

At the entrance to the daycare he had a kind of airlock-style perimeter, that I will henceforth refer to as the dog-lock, to prevent a mass jailbreak. Getting out of the car
was like a scene from The Walking Dead except instead of zombies there was a relentless horde of mongrels rattling against the walls of the pen. It was great. 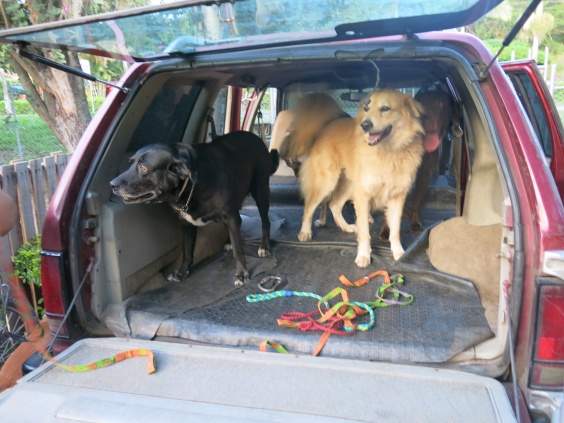 As it was the end of the day Walter had to make a delivery, returning all the daytime mutts back to their owners. His wife would call out the name of an individual dog and somehow, in spite of the utter imbroglio of fur and barking, that dog would find its way through a gap in the dog-lock and into the station wagon. Organized chaos at its best.

There were two Argentinian bike tourers also staying at the daycare but they were still out on a day trip when I arrived. As I made myself comfortable the doorbell rang and, assuming it was the Argentinians I went to let them in and introduce myself.

It wasn’t the Argentinians.

It was only bloody JONATHAN!

He turned out to be a friend of the family and a thoroughly decent bloke  to boot. Furthermore, having spent a year and a half traversing the continent on bike, he had a ton of useful tips for me. At the moment he’s in the process of sorting out his own casa de ciclistas where travellers on 2 wheels can stop by for a few nights free of charge. In a strange twist of fate (or the bike touring scene in Colombia really is that small) he instantly recognised my bike and knew the whole story behind it. Apparently a French cyclist had got injured and been forced to leave it behind in Medellin, never to return. It seems I got a very good deal and bikes of this ilk are like gold dust out here. 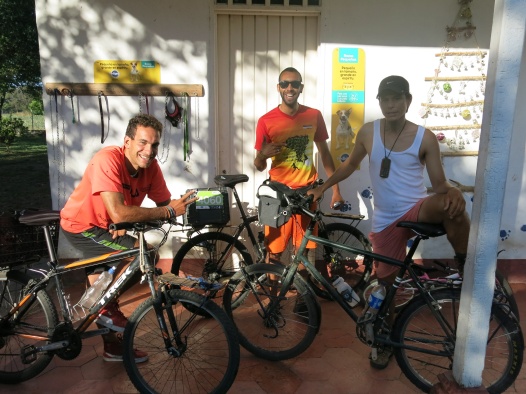 The Argentinian guys, Pedro and Fermin, showed up and the whole gang of us crammed in the back of the station wagon like the dogs that preceded us and went out for pizza and juice in Buga.

Next stop: through the Valle de Cauca to Santiago and Popayan

Tunes: The Menzingers – After The Party, Julien Baker – Sprained Ankle

2 thoughts on “In The Doghouse”