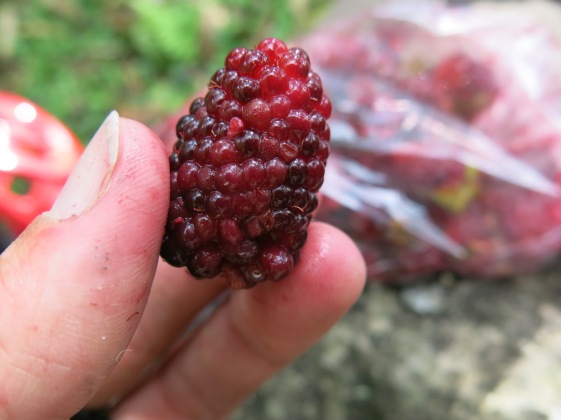 I woke up early and after a little meditation and a simple breakfast (along with the Andes, I see mountains of porridge in my near future) I was on my way. On the side of the road a man was selling huge bags of blackberries and for only 2,000 pesos and I couldn’t resist. About 10 seconds after paying I realised they were underripe and, judging by the vast quantity, were obviously intended for making juice. Not so easily deterred I kept shoveling them into my mouth. My tongue felt weird for about 2 days after. 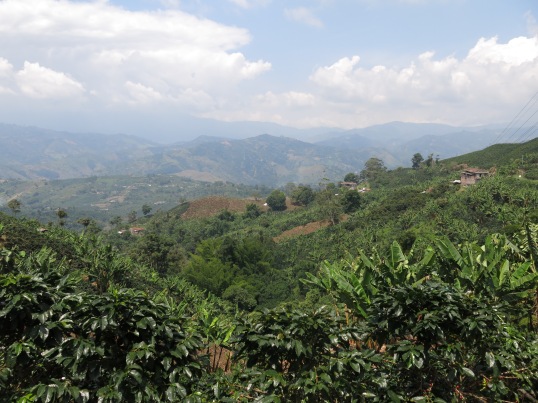 I stopped by at the decidedly unspectacular Anserma for a couple of coffees and a lechona (stuffed pig) empanada and then took a turn off the main road back up into the hills. This road proved to be my one true foray into what is known as the eje cafetero, or coffee region, where the majority of Colombian coffee is grown – most of which is then exported to the US. Hills upon hills of coffee plantations dominate the area and I saw little else on the way up to Risaralda where I actually managed to have lunch at lunchtime for the first time on the trip. 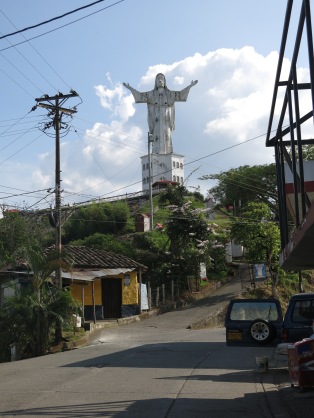 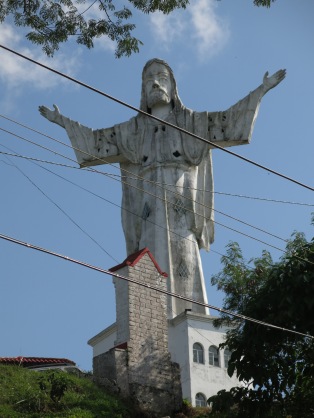 Next came San Jose and then Belalcazar, which has the best statue of JC I ever did see (Goldeneye DK mode, anyone?). I considered hunkering down here for the night but didn’t get great vibes so made a downhill dash for La Virginia, which lies in the Valle de Cauca. After a week of mountainous boot camp training, straight flat roads were a welcome change. 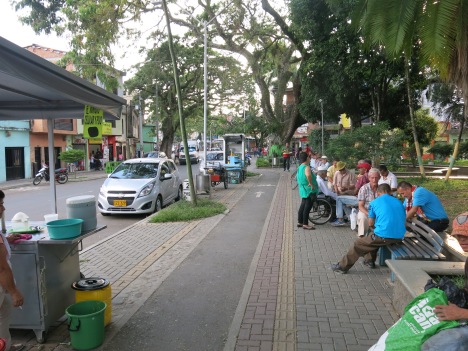 La Virginia proved to be a pretty lively spot and I had the fine fortune of spending a night in the hotel with the sweetest decor in town: 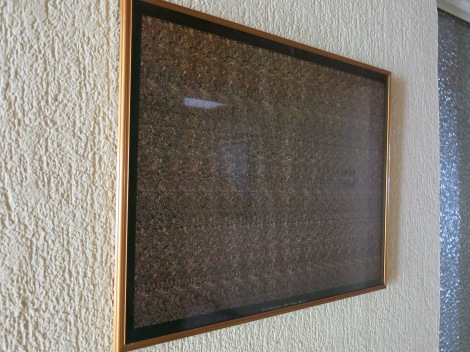 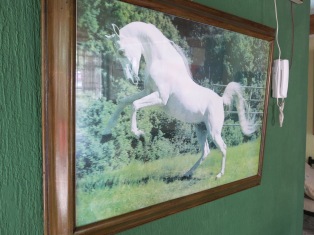 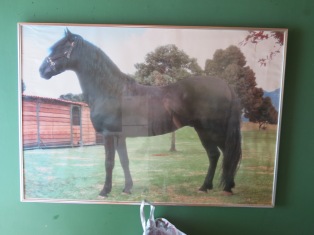 horses, oh so many horses... 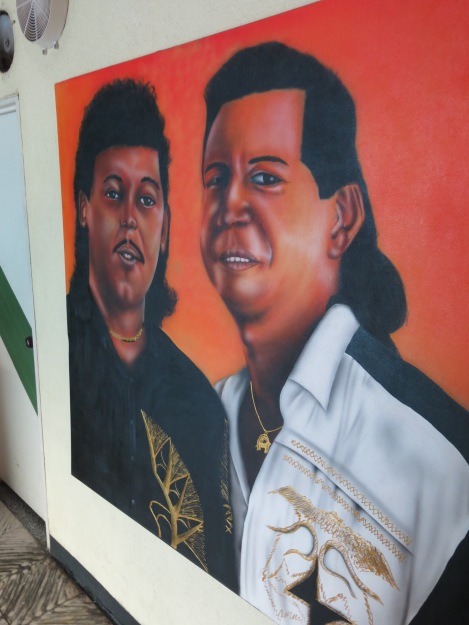 and the pièce de résistance.

It was Friday night but rather than hitting the night spots I settled for watching Apocalypto on my laptop (a batshit masterpiece). I woke up to another puncture, but since the hotel was situated right above a bicicleteria I was able to marvel at the brutish grace of the mechanic who, for a mere 1,500 pesos (40p), patched up my inner tube 10 times faster than I ever could’ve. I got chatting to the boss who told me I should take the main road out of town, but after pretending to follow his directions I doubled back and set off down a smaller road. You can’t tell me what to do friendly bike shop man!

Soon I was regretting this decision. It turned out the slow gravel road was popular among truck drivers and before long I was eating their dust. The scenery was nothing special and I realised how spoiled I’d been up in the hills. However, as a neared Ansermanuevo things started looking up… 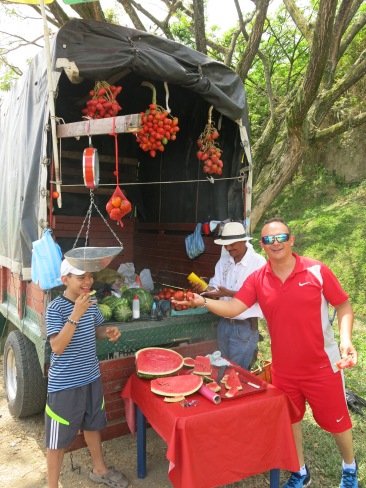 I  stopped for some roadside watermelon and got chatting to Mario who was on a weekend jaunt with his son Daniel (him on motorbike, Daniel on pushbike). 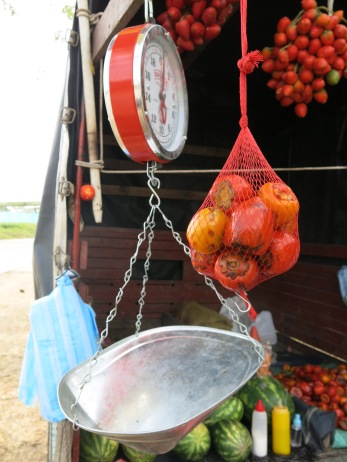 After explaining the “stamina” inducing powers of the Chontaduro fruit (after living in Colombia and Korea I swear like 40% of the world’s food allegedly gives men “stamina”) he very kindly offered to take me out for lunch at a nearby restaurant. Colombian hospitality at its finest! 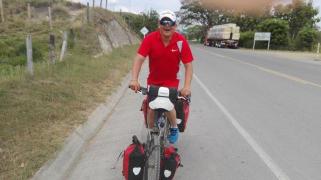 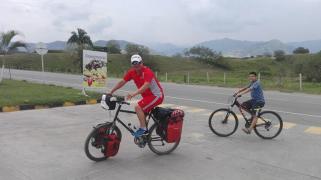 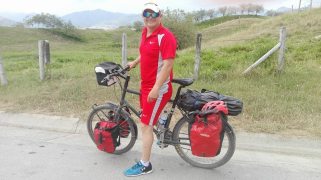 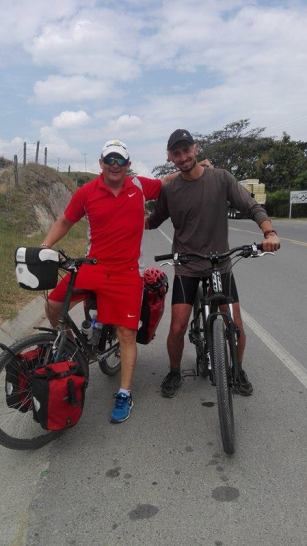 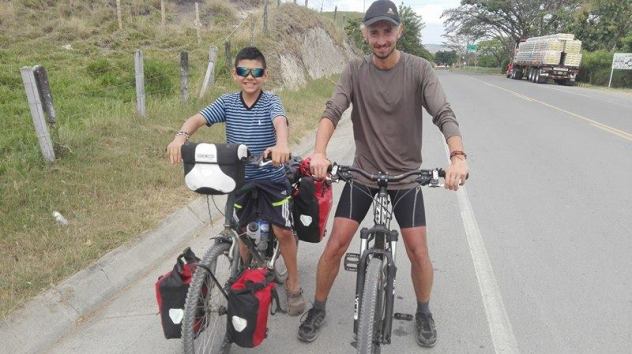 After a little impromptu photo shoot on the bikes I set off south, weighed down by both a full stomach and a Grinch-esque swollen heart. Over the next few hours I got a real head of steam and for the first time on the trip I felt like I was making good distance. I’ve chosen to not use a bike computer as I don’t want to get distracted by targets and numbers, but after a week of seeing little  progress on the map, it was encouraging to eat up a fair few miles. 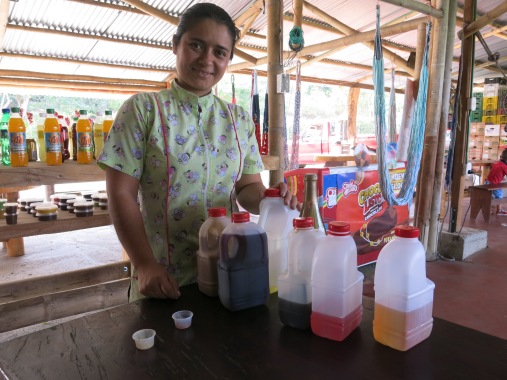 Just past San Luis, in the midst of a wine country that hitherto I had no idea existed, my curiosity got the better of me and I stopped at one of the roadside wineries. The lady offered me a taste of their wares and I sampled the very sweet locally grown wines along with a maracuya and a Baileys-style liqueur. Of course I had to buy something, so settled on a bottle of white (the reds tasted a bit like bad port) and asked if they’d mind decanting it into a plastic bottle for me

About 25km later I once again found myself scanning the landscape for suitable camping spots. After shunning a couple of questionable patches in sugarcane fields (serious Children of the Corn/Signs vibes) I half settled on a flat spot of dirt next to an abandoned old paddock. As I was pondering whether to commit to it or not, troubled by the close proximity to the path, a motorbike pulled up confirming my fears. A youngish guy got off and started chatting to me, all the while smoking through the smallest pipe I’d ever seen, fashioned from a guarana (?) seed. I was in no mood to chat and tried to get on my way, but he was intent on sharing his life story. He then offered to pull me up the nearby hill on his bike and I reluctantly accepted.

I strapped on my helmet and off we went, cruising our way through the dusk to “Casa Madrid” in nearby Bolivar, where he assured me I could stay. This all seemed too good to be true, but next thing I knew I was being warmly welcomed into a cosy colonial courtyard by Diana and her daughter Isabella and given a room free of charge. The father, Gustavo, who joined the circus aged 12 and now lives in Spain, used to have somewhat of a backpacker lifestyle and took to inviting wayward travelers into his home. After a string of Germans, Brits, Japanese and Israeli backpackers and bike tourists, I was the latest in a long line of guests invited into their little haven in Bolivar.

Me and Christian the bikerman, who suddenly took on the appearance of a modern day saint, bonded over a little of the wine I bought and he took me for a tour of the town on his motorbike. He asked me if I wanted to check out some colder climes and, game for adventure, I agreed. We set off on a 45 minute ride to Primavera, a pueblito up in the hills, though the dark winding road, all the while taking in the gorgeous views of the moonlit valley below. Primavera was indeed suitably chilly (“now you feel at home?” he chided) and we warmed up with a couple of empinadas and salichipapa (sausage and chips) in the town square before heading back down to Casa Madrid to catch some shut eye.

To quote George Harrison: “What is life?”