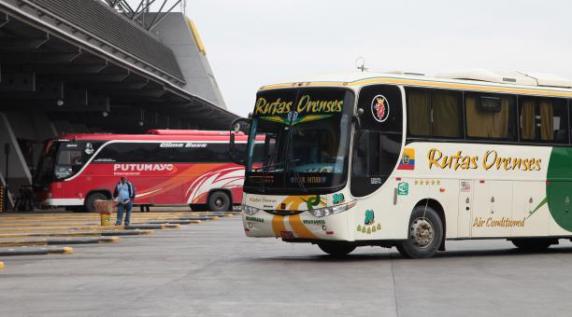 Taking the bus was easier than expected. All I had to do was detach all my panniers and pay the porter a small fee (I suspect this was a gringo tax) to store the bike. The road from Salinas to Guayaquil was just as I’d imagined: a boring, straight road past innumerable banana groves, and I felt further vindicated in taking the bus when the entire area around Guayaquil proved to be a swelteringly hot maelstrom of traffic and confusion.

The only time I regretted my decision was when, after 2 straight hours of driving uphill through the clouds, we emerged into Las Cajas national park. The park was something special: all jagged ridges and moody lagoons – essentially the Lake District on crack – and I wished I was experiencing it on 2 wheels. If I’d been better prepared I would’ve asked (or more likely bribed) the bus driver to let me off at the park entrance and cycled down from there.

Cuenca, where I spent the next couple of days, is considered “the world’s best place to retire on a budget” by International Living and it’s easy to see why. It’s brimming with culture, has a lively student scene and the weather is neither too hot nor too cold (according to my British sensibilities, anyway). For a city of 500,000+ residents it manages to retain a small town vibe – despite all of the Spanish colonial architecture it reminded me of Cambridge – and I soon felt at home as I aimlessly wandered the labyrinth of cobbled streets.

Another selling point is the food and drink. I’d not seen as many Indian restaurants or kebab shops anywhere else on the continent and there’s a burgeoning brewery scene: the Nordica IPA I tried (and then returned the next day to try again) was by far the best beer I’d had since leaving the UK.

Leaving Cuenca made me feel like a lab rat as I did my best to navigate the maze of one way streets. After nearing an hour I emerged from the May Day traffic and onto the Panamericana which led me off towards the hills. I was enjoying being back in the mountains until, after 30km of forgiving flats, I had to actually cycle up one. Having spent a month down at sea level I was no longer acclimatized to the altitude and while my legs said yes, my lungs said no. Slopes that wouldn’t have troubled me a few weeks back left me panting like a chain smoking pup.

One long afternoon later I made it up to 3500m where, having reacquainted myself with my old friend the paramo, I started looking for a place to spend the night. As I passed a sign to Hacienda el Hato I remembered reading that a couple of German cyclists had camped there and I decided to check it out.

The next couple of days were a bit of a roller coaster as I descended down to 1800m then back above 3000m repeatedly on the road to Loja. It was tough but by the end I could feel my lungs were acclimating and I was getting closer to my pre-beach bum condition.

Having been rejected by a magician in Cuenca (the ultimate shame) I thought I’d give Couchsurfing another try in Loja. Diego instantly answered my request and said I could come and stay with his family for a couple of nights. His wife, Diana, welcomed me into their home and fed me arroz con pollo while their adorable 2 year old daughter, Corina, ran around destroying things.

I’m now less than 200km from the Peru border so the next stretch will be my last in Ecuador. I’m hoping to make it down to San Ignacio, the first Peruvian town of any note, for my birthday on Monday so I can cry my lonely tears into pisco sours rather than the pisswater masquerading as beer on this side of the border (I’m looking at you Pilsener).

3 thoughts on “Giant Dogs, Trays of Grubs and Saying “Aloha” to Loja”